Crash of Cars Wiki
Register
Don't have an account?
Sign In
Advertisement
in: Stub, 5-Health Vehicles, Common Cars,
and 3 more

The 1950 Racer is Common vehicle in Crash of Cars.

There goes the beginning of an age where racing is finally free from war.

Its fast speed and responsive handling makes this a good Common vehicle to use. Its weakness is its big profile, attacting more projectiles to the vehicle. 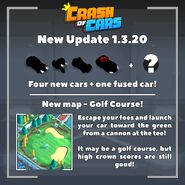