Able to eject it's "layers" to make it's profile smaller and faster, able to regain it's ejected layer back after picking up a Health. It's ejected layer is able to inflict damage to opponents upon contact.

The Babushcar is Fusion vehicle in Crash of Cars.

It unravels the fabric of reality itself as it shatters and scatters across the field.

When the Babushcar's health loss reaches a certain threshold, the vehicle ejects its shell, shrinking in size while its mobility is enhanced. The ejected components do nothing to nearby enemies. When it regains health, its performance reverts back to previous levels, although the first layer cannot be regenerated as it is considered as armor.

As the very first dynamic-performance vehicle in the game, there are countless strategies that can be attributed to this vehicle.

The first form is pretty slow and is average in terms of other statistics. Because of this, when joining a game, the Babushcar should usually avoid combat until the first layer is ejected.

The Second Layer is pretty average but is slightly faster and more agile. The performance is similar to the Earn to Die Truck and can easily catch up and defeat some slower vehicles.

The Third Layer is, however, not very advantageous because it tends to fishtail on turns and does not accelerate very fast, making it vulnerable to many other targets. However, at this point, if possible, a skilled player can try taking some limited damage to enter the 4th layer and start their escape. Players who are good at the Super Sooper can easily take advantage of this drift-like handling to avoid enemy fire.

The 4th layer is the last stand. If you don't get yourself back on, you never will. Aside from being very maneuverable and responsive, it has a good velocity, which is able to outrun many other vehicles that are actively pursuing except for very fast ones such as Speed, Speed 2.0, Grand Veloce, or Rumbler using its Boost, or Wind Up with its wind up ability. An Oiled Sparkie or a Teleporting Time Machine serve as occasional threats, but a quick driver can react and avoid these threats until they heal up quickly to stage 3 and preferably stage 2.

This vehicle is best used in the Hypergrid Map or team deathmatches, due to the better access to healing.Thanks to its ability, it is also a good pick in Crown Mode, (Which is the game's normal mode) However it may not excel against specialized vehicles. It's balanced, but it's not indestructible. 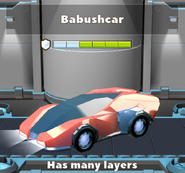 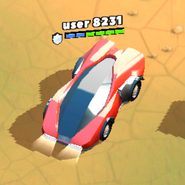 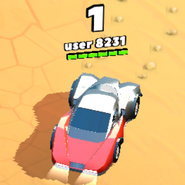 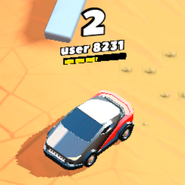 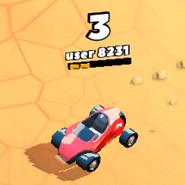 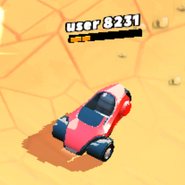 Lamborghini Terzo Millennio, one of the cars based on the first layer (layer based on)

Ford Indigo, one of the cars based on the first layer (layer based on)

Dodge M4A, the front of the second layer (layer based on)

Pagani Zonda, the rear of the second layer (layer based on)

Ford Focus, the 3rd layer (layer based on)

Campagna T-Rex, the 4th layer (layer based on)