The Banana Split is Fusion vehicle in Crash of Cars.

While it seems sweet and delicious, the terrible stats included in this bowl on wheels would eventually turn out to be bitter and salty.

Banana Split plays a distorted chime upon destroying a vehicle.

Banana Split's only good quality is its high top speed, which makes it incredibly fast for its size.

In terms of other attributes, Banana Split has a very large profile, low mass, and average handling. This makes it in essence unusable for most strategies due to its tendency to absorb enemy fire while not being able to negate them. 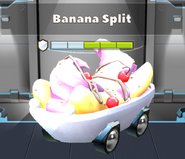 A Banana split getting stuck in the ground.

An example of a real-life Banana Split.