Drive 1200 meters without colliding into other vehicles.

The Bug is Common vehicle in Crash of Cars.

Its design has been everlasting, distinctive, and quite a classic that future fails to recreate.

The Bug is fairly sluggish, but makes up with its great handling which makes defensive tactics viable. 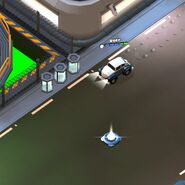