The Car Lab is a feature available on the main menu of the game. This is the place where the player can make Fusion Cars.

The Lab can be unlocked at prestige level 10. If the player goes to check there before they reach said level the gates will be locked and a message will tell the player to check back at level 10. Once they reach to that level and after claiming their upgrade reward, they will be prompted to open the Car Lab anytime, and the gates unlock, revealing a massive lab. Here, players can see a whole long queue of vehicles on a transporter track, where only a stationary front-quarter silhouette is present unless the vehicle is unlocked already. There is a "Fuse" button, but it will be greyed out with insufficient materials.

If the vehicle has an ability, it is displayed under the vehicle, but above the fuse button, as "????", similar to the vehicle's name.

There are four pods that act as placeholders for up to four vehicles required for fusing.

All Fusion Vehicles are unable to be upgraded. However, they all come with 2 armor in addition to their base health.

Once a fusion vehicle is made, materials are consumed and not refunded. Players will not lose prestige, however.

The number of vehicle types and individual quantity are also listed. Any fusion vehicle will require 2-4 vehicles to serve as materials.

After performing a fusion, the required vehicles will be downgraded or even removed from the player's collection depending on level and requirement. The new vehicle level is the original vehicle's level minus the required vehicle's level. If a vehicle is degraded/consumed, it is still possible to upgrade/obtain it via Prize Machines. In case of hidden vehicles lost to fusion, they can be additionally obtained with the original method. Degraded vehicles will lose armor. If a vehicle in which the player has completed its car quest is lost due to a fusion, then the total number of completed car quests will stay the same and you will automatically regain its badge upon reobtaining the vehicle. 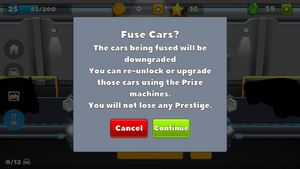 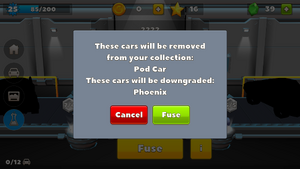 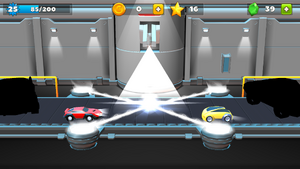 The example taken here is Concept. After confirming that you agreed to lose those cars to get a new car, an arm extends out of the middle wall out of a hidden hole, emits a scan light, then fused the cars together. Note that even the pods with no cars still have beams attached to them. 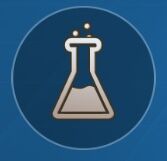 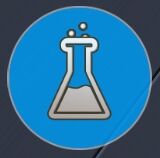 The Car Lab and Fusion Vehicles button when selected