Distinctive from celebrations, this behemoth maintains its grim yet joyful stance.

The Cement Truck can be considered as an improvement over the Garbage Truck with better performance, specifically beating the latter's top speed by a slight margin. It also has a smaller hit-box, making it more viable in gameplay, although it still must resort to passive strategies. 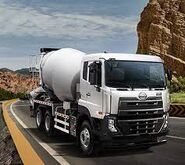