Crash of Cars Wiki
Register
Don't have an account?
Sign In
Advertisement
in: Stub, Fusion Cars, Cars,
and 3 more

This vehicle cannot be capsized.

The Concept is Fusion vehicle in Crash of Cars.

It's a stylish piece of masterwork that doesn't lose out in combat either.

The Concept cannot be overturned, making it less vulnerable from enemies.

Concept has average performance. It's a typical fast vehicle that has all-round statistics, yet a little higher health improves it's vitality. As it succeeded the stability of Phoenix but is tougher, it should be played the same. Also, its hidden ability also provides a little bit survival chance, as the vehicle will never be immobilized via flipping or capsizing.

It should be noted that the understeer also means a large turn radius. Other than that, the Concept's statistics allows for multi-purpose gameplay. As the jack of all but master of none, do not go too extreme for each purpose. 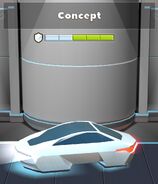