40 Candy
The Declan's car is Common vehicle in Crash of Cars.

Operating is easy. But the rest of its learning curve goes sky high.

Declan's Car is similar to the Tuk Tuk, The only difference is its reduced top speed in exchange for handling. This requires even tighter maneuvers for it's handling advantage, as otherwise, it can easily lose to other vehicles who are either faster, heavier, or both. 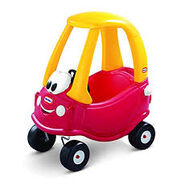