Get 5 seconds of air time in a single attempt.
The Duke is Common vehicle in Crash of Cars.

It may look normal and less recognizable, and not even iconic, However, it isn't that bad at combat.

The Duke had favorable handling and acceleration, which makes it decent for passive gameplay. however, due to its wide body, it is vulnerable against chasers. 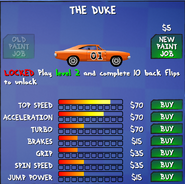 The Duke as seen in seen in Renegade Racing