Same as the Cannon

The Flying Dutchman
The Dutchman is Fusion vehicle in Crash of Cars.

Thousands of vengeful cannonballs can be fired from a single spirit, and yet it carries on eternally without fading.

Dutchman is a hovering wooden ship with brown plants forming the majority of its structure. Its bow is relatively sharp, and is separated into its lower spiked jaw and top deck. Two anchors dangle right beside them. Its sides contain two grated portholes each, where the cannons emerge when they are equipped. Most of the ship's frames are covered in black, metallic outlines. The stern contains the crew quarters with two smaller windows on the sides and a single large one on the backend. The roof protrudes slightly and has a smaller passage supported by metal beams with another stretching across the ship horizontally, while atop of the crew cabin is one of its light-brown wooden masts. The bow mast is between the two horizontal metal beams. Both masts are tied to each other with the front attaching itself to the bow, all with white tethers. Between the cannon portholes, a total of four metal beams stretch vertically across. Closer to the upper deck are vague signs of black scorch marks. The crew cabin windows glow green, while spectral mists of the same color form the sail and seep from the bow. When moving, it also drags a unique spectral trail.

Dutchman's cannon power-ups are replaced by the Dutchman's Cannon, which functions similar to the Limo's double side cannons but covers both directions. Their fire rate is lower than every other cannon variant, and they are affected by normal cannon modifiers.

It will always obtain the Dutchman's Cannon as its first power-up after spawn.

Its teleportation ability is identical to the Submarine, although it has a 16-second cool down between uses.

Dutchman is quite a unique vehicle. It's base stats are horrible, similar to the Pirate Ship, and it loses it's defensive capabilities in exchange for more offensive output. The poor stats prevent pursuits and the slow fire rate of the cannons cannot catch enemies that could easily dodge them. However, they have slightly smaller spacing than the Limo, increasing the chance of damaging enemies. This makes it quite powerful against larger vehicles as precisely-timed bursts, despite the low fire rate, can easily take out most of them if they don't have some sort of invincibility. As for the Teleportation ability, it should not be used too often just in case one needs it to escape. 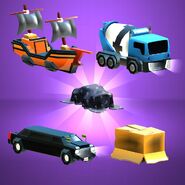 The original fusion combo for Dutchman. 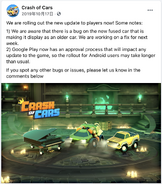 Not Doppler addressing the bug that caused Dutchman's model error.

A traditional depiction of the Flying Dutchman. 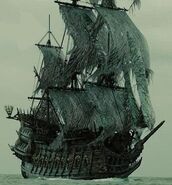 The Flying Dutchman from the film *Pirates of the Caribbean*.