The Fury is Fusion vehicle in Crash of Cars.

As its name suggests, its presence floods the wrath wherever it passes.

Fury is a metallic-grey sports car with black-tinted windows. The engine is partially exposed with a single visible axle, a red transmission band, and a triple-nozzle bug catcher scoop, partially obstructing the windshield. Four integrated lights are evenly distributed on the concealed grille. The backside sinks slightly inside the vehicle, with two oddly-shaped rear lights. Its engine, rims and bumpers are all steel-colored. The hood and the sides have a total of 6 grooves sinking into the body. The wheel arches completely cover the wheels' topside.

Fury is a well-balanced vehicle, with decent health pool, excellent acceleration and good top speed. Thus, it is a great choice for semi-aggressive gameplay. While it isn't a very competitive car, hit-and-run tactics are still essential to play it. The bad handing however, may prove to be a problem in some cases due to the car's already strong acceleration and can be troublesome if the user wishes to adapt their speed, especially during a turn.

Because of the high acceleration inherited from Sprint Car, getting stuck is hardly a problem, which can resolve many awkward situations caused by its poor handling. 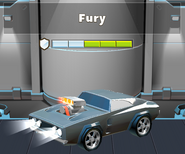