Crash of Cars Wiki
Register
Don't have an account?
Sign In
Advertisement
in: Stub, Fusion Cars, Cars,
and 2 more

It uses its hydraulics whenever the player drives it

The Lowrider is Fusion vehicle in Crash of Cars.

Up high, down low. The former perishes more than the latter.

Lowrider is a decent car with above average stats. It is viable in many strategies as a result.

The only particular weakness is its excessively large profile for its performance and most specifically the average top speed, which makes it vulnerable to faster threats. 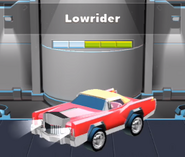