Make 40 collisions in one game

350 Gems
The Mechamorph is Legendary vehicle in Crash of Cars.

It is never what it seems to be. There's more than meets the eye.

When enough crowns are collected, Mechamorph enters rage mode for 12 seconds. In this form, it will gain invincibility, a significant bonus to top speed, and a penalty to both handling and acceleration. It also knocks back any vehicle too close to it, similar to the War Machine.

Mechamorph cannot enter rage mode in Blitz Mode, TDM and Crash Ball, regardless if there are crowns to collect or not.

Without its ability, Mechamorph is a slow car with outstanding handling. This makes it generally suitable for picking off opponents one by one to collect crowns for its ability. In modes where it cannot transform, however, it should not be used in the first place.

During Rage Mode, Mechamorph is invincible and can push cars away; this can either be used offensively or defensively.

For offensive play, Mechamorph can use its ability to rush through firefights, engaging other vehicles either with its punches, or with offensive power-ups such as Cannon or Flamethrower, or both, while Rage Mode is active. While in Rage Mode, Mechamorph's handling is weakened and much skill is required for maximum efficiency; however, the punching ability, along with the invincibility, turns it into a speedy War Machine for a limited duration. The ability is not capable of great damage, and thus, it greatly depends on external factors to harass its targets.

On the other hand, Mechamorph's Rage Mode can also be used in a more passive manner, using its improved speed to get away from pursuers or perhaps punching them away, while trying to make use of the free time earned through Rage Mode to obtain defensive powerups like Shield or Health.

Either way, due to the fact that crowns collected in Rage Mode do not carry over for future activations, as well as subsequent transformations requiring more crowns, entering Rage Mode can be a tough task late game. Shadow can also be a major threat, as it forces Mechamorph to exit rage mode and inflicts damage, opening it to attacks again in either aggressive or passive play in addition to chipping its low health pool. Due to Mechamorph's lackluster standard stats and the inability to inflict much damage in rage on its own makes it less viable than most Legendaries in Crown Mode due to their more appealing abilities.

On the other hand, Mechamorph is one of the few vehicles with invincibility in Skirmish, the others being Ricochet and Bloodrush, where Shield is banned. This, in conjunction with the fact that Mechamorph can secure large amounts of kills while in Rage Mode, makes Mechamorph significantly more potent in this mode than in regular Crown Mode, where items like Shield can easily prevent Mechamorph from doing any significant harm. Overall, it could be described that Mechamorph is a highly specialized vehicle, in that it is only significantly noteworthy in a singular game mode of Skirmish but has a great advantage over other vehicles in its niche.

Mechamorph after the release of Volcano Update update along with Sparkie.

Mechamorph after the release of Golf Course update along with Shadow. 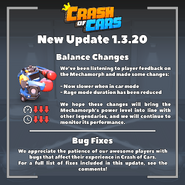 The official Not Doppler notice regarding Mechamorph's nerf.