Increased health, acceleration and armor limit.
The Mega Phantom is Boss vehicle in Crash of Cars.

It redefines the definition of a monster, a monstrosity, an abomination, you name it.

Mega Phantom can only spawn in crown mode within the Dungeon Map.

There are a few windows with green flames burning within, and these are the portal to the arena within the map. When battling, the portals are blocked by metal grates to prevent other players' intervention in the battle.

The Mega Phantom only spawns when all of the following conditions are met:

When this occurs, a green team tag is added to all participant vehicles, preventing them from damaging each other, and the Mega Phantom will start attacking them.

The Mega Phantom's armor scales up as the quantity of participants increases.

Note that Freeze Cannon, Oil, Railgun, Drill and Sentry Turret (for Citadel users) will always be unusable as all power-ups are removed prior to the fight and they don't spawn in the boss room. Other power-ups not listed in the following parts of the article are not recommended for use and should be used immediately in favor for obtaining potentially better ones.

Glitched Mega Phantom stuck outside of its arena. 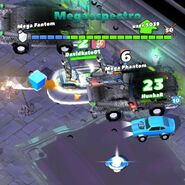 Name & spawn glitches with the Mega Phantom resulting in 2 copies spawning at the same time while three different names are present.