Crash of Cars Wiki
Register
Don't have an account?
Sign In
Advertisement
in: Hidden Vehicles, Common Cars, Cars,
and 2 more

Get 40 power-ups in a single game.
The Mine cart is Common vehicle in Crash of Cars.

Fun on rails is also hell on hails. Said no vehicle ever.

This vehicle requires 3 people for unlocking. Two of them must own a fast vehicle like Speed or Classic Racer, and the last one must own a heavy vehicle like Tank or Monster. It is also possible to skip the crystal wall section of the unlocking process by having Star use the Hovercraft and first obtaining a Boost powerup. They can then drive into the wall and wait until they start to climb up it, then activate their boost and skip the entire section.

The player who wants the vehicle needs to purchase the first standard skin with a star on it. The other two must purchase the square tile and stripe skins respectively. (They will be referred to as Star/Square/Stripe in the following text) It is highly recommended to set match time to maximum.

Inside the cave, there are 3 unique tiles with star/stripe/square on them respectively. Staying inside any individual section of the mineshaft for too long will cause a cave-in to occur, destroying anything inside.

Step 1: Park in the position according to skin, and avoid damaging all obstacles. If they are destroyed, all should wait for them to respawn, though this is not required. When all are in position, a gate rises in front of the star tile, allowing Star to enter. They must turn right, and will face a giant rock wall.

Step 2: The heavy vehicle must get to work and ram the crack, allowing Star to pass through. They will face a crystal wall afterwards.

Step 3: Every crystal obstacle in the cave must be dislodged by Stripe and Square. If done in time, Star will find the wall collapsed and allowed to move forwards to an elevator.

Step 4: The heavy vehicle must board the elevator via an unmarked green ramp, acting as a counterweight and dragging it down. After levitation, Star should turn left, then a cut-scene will play. If done successfully, the other two will observe Star turning into a bot. They can then leave the match.

A cave section deeper in the shaft is shown with 9 uneven crystals in the foreground, surrounding another ledge with a twisted rail. The rail is incomplete beyond its terminal edge. The scenery experiences turbulence and vibrations as it gradually zooms in, eventually culminating in it stopping as Mine cart slides down the rail and jumps before screeching to a halt, briefly throwing its crystals in the air. As it stops, one of the crystals flashes and plays a chime.

Mine cart is a steel, monochromic, pixelated rail cart. Three crystals are unevenly arranged in its hold. Four steel beams run through the vehicle's sides slightly below the edges, with an additional shaft just ahead. Its rectangular wheels are connected by two axles.

The Mine Cart is a very powerful common vehicle. It has high maneuverability and a resonable amount of top speed, but does not accelerate quickly and might have a larger turning radius for a small vehicle. 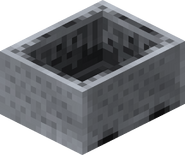