Crash of Cars Wiki
Register
Don't have an account?
Sign In
Advertisement
in: Stub, Fusion Cars, Cars,
and 2 more

Has 50% damage resistance against collisions

The Mini Tank is Fusion vehicle in Crash of Cars.

Like a tank, smite a tank. Life is ours, we live it our way.

The Mini Tank is a compact vehicle with an army green bodywork, though brighter than Tank's olive drab. It possesses treads, a tiny top hatch, vertical truck exhausts and a short turret gun with a muzzle brake

The Mini Tank has 50% damage resistance.

The Mini Tank is a much more powerful version of the original Tank. Despite its small hit-box, it retains high ramming damage and its defense versus enemy impact allows it to survive extended close-quarter brawls when power-ups are not used. It also has excellent agility and state-of-the-art acceleration, keeping it at full speed for most of the battle while reacting to threats swiftly. Its main strength lies in its general advantages with defensive strategies, making it hard to take out. Competitively it may not escape enemies with ease, but it dominates close quarters when fought fair and square.

A major disadvantage of Mini Tank, however, is its top speed. While acceptable for a 6-health vehicle, it cannot outrun threats readily, and will quickly succumb to CQC Power-ups such as Flamethrowers, as well as being an easy target for faster vehicles without tight reflexes or manuvers. Ramming is an effective option in CQC, though it may not be as viable if the target is at an advantage with power-ups or the like. 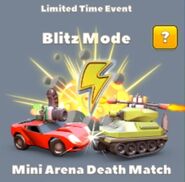