Crash of Cars Wiki
Register
Don't have an account?
Sign In
Advertisement
in: Cars, Epic Cars, 6-Health Vehicles,
and 2 more

Get 20 kills in total with Homing Missiles

AN/TWQ-1 Avenger HUMVEE Variant
The Missile Truck is an Epic vehicle in Crash of Cars.

A subtle, generic LAV, it brings hell to any foe with a set of horrifying buddies.

Missile Truck is a generic olive drab military SUV with black-tinted windows. It has a set of neatly-arranged vertical grates and also features two sets of headlights. It is further reinforced by a metal bull-bar placed slightly ahead of the engine. The backside is sloped, and on the vertical panel an attached spare tyre can be seen. The front doors also budge out slightly compared to the rear doors, which streamline perfectly with the rest of the vehicle.

If the Missile Truck picks up a Homing Missile, three launchers are equipped simultaneously. The launchers act as individuals, thus, they may lock onto different targets individually. They can also lock on the same target. When used, all three are instantly fired.

It will also always obtain the Homing Missile as the first power-up after spawn.

The Missile Truck is a rather interesting vehicle to play. Since the Homing Missiles are rather weak individually, this provides significant combat advantage. It has average stats, but the missiles can be put to tactical use.

It may be extremely easy to dodge missiles, and players are often compelled to do so due to their high damage per hit, making it a great area denial weapon. This makes the missile truck extremely deadly under circumstances where one cannot avoid the them, as should all three missiles connect successfully, they will deal a total of a whopping 7.5 damage, enough to destroy any vehicle but the War Machine at full health, barring armor.

Play this vehicle as any normal vehicle and avoid firefights until you pick up the Homing Missile, when the Homing Missiles equipped, either actively search for a target or let an unsuspecting vehicle come to you. The missiles can be either used to hunt down enemy vehicles, flush them into a more vulnerable position, or disorient pursuers.

Note that if the targets are unable to be resolved by the missiles, they could be saved for something else. enemies with invincibility should not be targeted. The Black Hole, and by an extension the Supernova also poses a great threat, as they can neutralize homing missiles.

Though the chance of getting missiles will not be the most reliable and there are various counters to them, the Missile Truck nevertheless stands out for it's high potential in many situations. 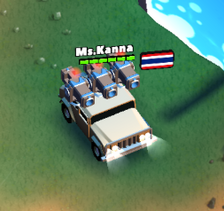 The ability in play 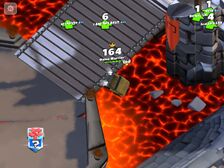 A missile truck dangling on a bridge in Castle