Crash of Cars Wiki
Register
Don't have an account?
Sign In
Advertisement
in: Stub, Cars, Common Cars,
and 3 more

Destroy 10 vehicles in a single game.

The Muscle is Common vehicle in Crash of Cars.

If you're looking for trouble, well, you lucked out.

The Muscle is a prestige car unlocked at level 7.

Muscle is essentially a tougher but slower Sprint Car, it has good top speed and average acceleration. However, it suffered from poor handling - While it's pretty responsive, it tends to fishtail on turns and has a wide turn radius. which makes it vulnerable as it also slows down significantly, which is hazardous in a pursuit. It is more suitable for defensive gameplay rather than aggressive.

You can use the poor handling of this car to your advantage. During a pursuit, you can prevent your pursuers from destroying you by getting an offensive weapon like a cannon. Then, turn right/left 90 degrees and go in reverse. Shoot your weapon to destroy the pursuer, then turn 180 degrees (J-Turn) and you are back on track. Make sure there are no obstacles in your path in order to perform this move. 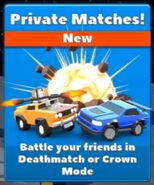 The Muscle alongside the Horizon in the cover icon of Private Match mode.