Use handbrake to activate manual drifting

Primarily based on Nissan Silvia S15
The ND-D1 is Fusion vehicle in Crash of Cars.

It demonstrates the true art of drifting while burning rubber, leaving other racers in the dust.

Tapping the brakes while turning makes the ND-D1 initiate a controlled drift, gaining bonuses to acceleration, handling and top speed. The player can control the angle of the drift and the car will continue drifting until the vehicle hits an obstacle (such as static map scenery and other vehicles) or turns in the opposite direction.

The ND-D1 requires a totally different play-style, even from players who main drift cars. This is primarily because braking while in a turn will initiate it's drift. The car also has a wider turn radius than most drift cars. Players using the car for the first time should be wary as the car will drift in a straight line and it can be awkward to get used to the drift system. The drifting mechanic does open up a lot of new options as it increases the speed of the vehicle and allows it to escape from tight spots or being boxed in by multiple enemies. The drift also allows the side cannon to be used as either a front cannon for offense or rear cannon for defense depending on the direction of the drift and player choice.

Despite this, the car is very light and will suffer considerable knock-back when hit by melee weapons or the heavier cars, so it is inadvisable to enter extended brawls. 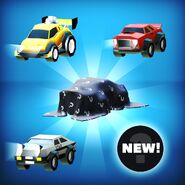 The Not Doppler Loading Screen, which appears for almost every game they've made

Advan S15 livery from a game on another website (NOT MINE)