Crash of Cars Wiki
Register
Don't have an account?
Sign In
Advertisement
in: Stub, Cars, 6-Health Vehicles,
and 2 more

The Nuclear is Fusion vehicle in Crash of Cars.

At its signal, the sky shatters.

The Nuclear's Homing Missile power-ups are replaced with Missile Strike, which is also its first power-up after spawn. Once equipped, the launcher on its back rises. When fired, the missile is launched into the air and takes 1 second to activate its engines while the launcher retracts and loads another cosmetic missile.

Once airborne, the missile will acquire lock-on a specified target. If there aren't any, the missile will travel until another one is found. Once within proximity, the missile pauses, then slams to the ground after 1 second and detonates, doing 1.25 damage in its area of effect.

Nuclear is quite fast and agile for its size that allows it to outrun slower opponents and enables better use for power-ups normally intended for aggressive play. Its handling is also good and can make quick turns without issue. The biggest issue would be its massive size and unusually low mass, which means that knock-back effects will be able to easily push it away and the vehicle itself won't be able to avoid damage with ease.

While the Missile Strike does relatively less damage, it is difficult to dodge due to its trajectory and doesn't require much input for the vehicle itself. It can work against a low health vehicle, or with the Freeze Cannon, to maximize the missile's efficiency. Its AOE also allows it to do massive collateral damage. Furthermore, since the missile strike is a power-up, it is possible to obtain multiple copies in a row, allowing Nuclear to wreck havoc onto many foes. 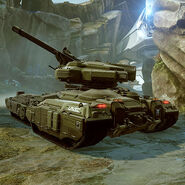