Plays a Party Horn if it destroys a vehicle

The Party Car is Fusion vehicle in Crash of Cars.

Sometimes popular culture is crazy and superficial. Other times, they are heavy, robust yet surprisingly eccentric.

Party Car is a large, six-wheel SUV with reflective black paint. On top is a flat roof that contains several neon light bars and a white frame, from which its speaker emerges. Across the two sides of the roof contains two silver stretches, possibly roof racks. Its windows constantly change color, similar to the top lights, and the rear window stretches all the way through even the backside. Its front grille consists of vertical bars stretching across it while the grille itself is covered by yet another frame, which also encases its two front lights, while leaving the orange turning lights aside on the front wheel arches. Its doors have silver handles. The engine hood has grey double intakes in the middle. The front wheels and the four rear wheels are respectively encased in their corresponding wheel arches, which partially covers them while being joined by a thin sidestep midway through the chassis. On the backside, a third metal frame covers the bumper with two rear lights just on top.

Whenever the Party Car destroys an enemy, it plays electrical pop music for five seconds.

Party Car excels in durability. Having a good amount of health bars to sustain a few more hits than other cars. However, this car has a wide profile and its top speed is lacking. As such, passive gameplay is recommended. 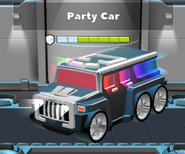