Crash of Cars Wiki
Register
Don't have an account?
Sign In
Advertisement
in: Gameplay, Game Modes, Mine Update,
and 3 more

Private Match is a game mode in Crash of Cars.

The Private Matches were added in the 1.1.52 version of the game, as a part of the Mine Update. They are accessed by tapping the arrow next to the play button. All Private Matches have a max capacity of six players and can't be started without at least 2 players including the host, though bots can be manually added, up to a maximum of four. All matches have a time limit and a score limit. The team/individual that gets to the point limit will win the match and ending it as a result. Otherwise, if the time limit expires, either sudden death will engage and result in a draw (Team-based gameplay only), or the match ends with the highest-scoring team/individual winning the match. 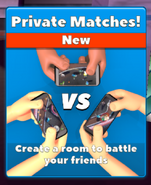 Alternate Private Match logo seen in 2017 Mansion Update, with Moon as the map