Crash of Cars Wiki
Register
Don't have an account?
Sign In
Advertisement
in: Common Cars, Hidden Vehicles, Pages with missing stats,
and 3 more

The Pumpkin is Common vehicle in Crash of Cars.

In this town we call home, everybody heil to the pumpkin car.

Pumpkin is exclusive to the Hollows Map. It's highly recommended to use a slow vehicle (Tractor, War Machine, etc) as velocity will not be critical to finding this vehicle. Additionally, it's highly advisable to search for it in a private match to minimize bot intervention.

First, four dark reapers must be located (must be done in order):

Afterwards, three stone slabs must be driven over (not in particular order):

When they are all registered, simply cruise around the ritual circle in the center of the map multiple times until the game plays a notification sound while a smaller, silver, semi-transparent aura appears around the pick-up box spawn. Upon driving into this aura, a cut-scene plays.

A small, unripe pumpkin drops in the center, making a splash sound as it collides with the ground. It grows thrice, the latter two times absorbing substances (possibly ectoplasm) seeping from the ground before it simply disappears. The Pumpkin then spawns, accompanied by a loud engine revving, before slowly descending to the ground. The cutscene in the 2021 Hollows Update features more textures and glow to its animation sequence.

Pumpkin's overall stats are extremely weak, even compared to the pre-Volcano Update Chuck. As such, it is at best a gag vehicle for cosmetic purposes. 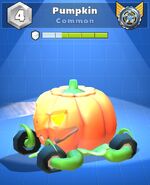 When driving around the middle in Hallows (Last step)

Pumpkin when it was found