Releasing a controllable small RC Car that lasted for 8 seconds. if the RC Car is destroyed, it will exploded and deals 2.5 damage.

Around the size of a Trebuchet explosion without area modifiers

The RC Van is an Epic vehicle in Crash of Cars.

Just when you thought it was over, it goes down with another blast.

When the RC Van is destroyed, it deploys a small RC Car. It can pick up crowns and health, but will not regain health. Unused power-ups will vanish. The timer starts counting down as soon as RC Van is destroyed, although the RC Car takes a brief second to land before it can move, and it may take damage from enemies when this occurs.

When triggered, there is a 0.5 second delay before it explodes, during which the area of effect is briefly indicated by a circle that flashes as the RC Car explodes. Only after that would crowns be dropped from the RC Car.

RC Van's stats are generally below average. Most other vehicles can easily catch up to it. While it has sufficient agility for avoiding threats, its low mass may result in disruptive setbacks.

The RC Car opens up an entirely different strategy for gameplay as a last-ditch suicide attack. Its range, while small, is predictable and quite significant compared to other vehicles' abilities. While fragile, it has high mobility and can be extremely devastating due to the high damage value. Its nature makes it most effective against targets already low on health, disabled vehicles, or a group of foes, all of which either cannot afford to take the hit, will be readily within range, or both. 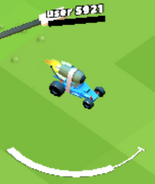 Another view with the skin

With the transparency skin

Another view with the transparency skin.

Second Generation Dodge Ram Sportsman, a car that the RC Van is based on