Get 60 seconds of total flight time.
The Scooter is a vehicle of common rarity in Crash of Cars.

Scuttling its way from place to place and yet no one notice.

The Scooter is generally suitable for semi-passive gameplay. While its speed is considered average, its sleek profile and excellent handling allowing it to evading various attacks. However, due to being a two-wheeled vehicle and having a very short length, getting capsized can be common. 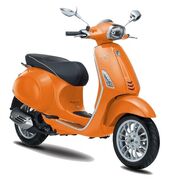 Vespa Sprint (car based on)
Community content is available under CC-BY-SA unless otherwise noted.
Advertisement