Crash of Cars Wiki
Register
Don't have an account?
Sign In
Advertisement
in: Epic Cars, Cars, Upcoming Vehicles,
and 3 more

Hitting oil does not cause the vehicle to lose control. Instead it will enter it's fireball form.
First power-up is always oil

Destroy 6 vehicles in a single game

The Omnidroid from "The Incredibles"

The Sparkie is an Epic vehicle in Crash of Cars.

The blood of the industry lights up its fire as they boil under its frenzy.

Sparkie appears to be a navy blue, circular vehicle. It has four extendable legs attached by metallic screws and white joints, as well as another extendable arm. Each comes with a wheel right at the tip, and the legs themselves rotate when the vehicle turns. Its light is a single, unique shape with an outline around it. The top appears to be a huge hatch fastened by four bolts. A single metal protrusion on the top bends forwards and constantly emits sparks. When in fireball form, its legs contract, and the vehicle rolls forwards while covered in flames, dragging a smoke trail behind. When the ability ends, Sparkie rights itself up and its legs extend again.

Sparkie is immune to negative oil effects from Oil. Upon hitting one, it enters its fireball form for five seconds, decreasing its hit box and preventing it from taking damage. Top speed and acceleration are greatly enhanced, but handling is impaired. This ability's duration can be extended by 1 second for each extra puddle while the ability is active. The size of the puddle has no effect on the ability.

Sparkie also has 100% of getting Oil as the first Pick-Up item.

This ability does not function in Blitz Mode.

In it's normal form, Sparkie's top speed is lacking and it's large hit-box makes it vulnerable. The handling somewhat compensates for this. This allows Sparkie to change directions very quickly, making it an effective offensive vehicle. However, without transforming into a fireball or obtaining offensive power-ups, the low top speed effectively prevents it from direct combat, as most fast vehicles can easily catch up to it, and its large hit-box does not help either.

One notable aspect is that Sparkie is a direct counter to Oiler, as when Oiler drops oil, Sparkie will burst into flames and quickly destroy it. One can use this in Team deathmatches with allied oilers providing support.

Sparkie is most suitable with magma pattern 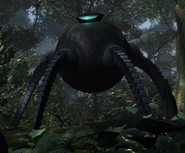 Omnidroid from the first film of "The Incredibles"