Crash of Cars Wiki
Register
Don't have an account?
Sign In
Advertisement
in: Stub, Cars, 7-Health Vehicles,
and 2 more

Behind the spectacular rampage are moments of grim truths forced by pressurized outbursts.

When in motion for at least a second, the Steamroller can crush and paralyze an enemy for 3 seconds while also inflicting 2 damage.

The ability will not work in the following scenarios: 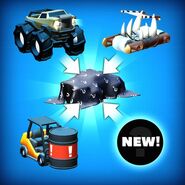