Break 450 objects.
The Stone Age is a vehicle of common rarity in Crash of Cars. While it seems to be crumbling all the time, it's a pretty balanced vehicle and doesn't easily break.

The Stone Age's handling and acceleration are inferior when compared to many other 5-health vehicles of similar level. However, it does have an average amount of top speed that allows it to cruise the map with passive strategies. Due to the light weight it is relatively fragile and vulnerable to knock-back effects from other, heavier vehicles or just the ones on the same level. Overall this vehicle is not suited for all types of combat due to its low stats, though it's smaller hitbox reduces the chances of getting hit if you are wandering around the map, picking up crowns whist the others clash. 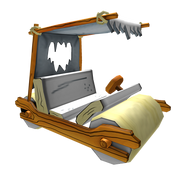