The Super Sooper is Fusion vehicle in Crash of Cars.

How does one redefine Super? It's one of life's many mysteries......

Super Sooper resembles its original counterpart, the Sooper, specifically with the roof and the main body. Its engine compartment has been entirely replaced with an exposed engine and a large metal grate. Rectangular lights are attached closely to the grate and the engine itself is outfitted with a single bug catcher that projects orange flares. It has matte-black tinted windshields, grey support beams, a white roof, and blue body paint. Its wheel rims have detailed design, with the rear ones sinking slightly inside and relatively misaligned to the front wheels. The sides also possess triple exhausts. In-game, the bug catcher and the exhausts both vibrate rapidly, with the latter producing smoke that trails behind the vehicle.

Super Sooper's main attribute is its extremely responsive handling, allowing it to overwhelm the opponent with sheer agility by making sharp turns. A major downside to this, however, is its low top speed. Its other stats are acceptable at its level. One may experience significant difficulty in mastering this vehicle, as while the stats suggest a highly aggressive strategy, this vehicle will not last long in extended brawls without properly dodging, Fortunately, its relatively small hit box assists greatly in this aspect. With perfectly-timed reactions, Super Sooper can become just as threatening as any that were faster.

Although generally not a viable strategy, the vehicle's smoke trails can be sometimes used to confuse opponents by hiding anything under it from a projectile to another enemy vehicle. 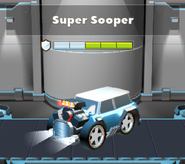