Crash of Cars Wiki
Register
Don't have an account?
Sign In
Advertisement
in: Stub, Disorganized Pages, Hidden Vehicles,
and 5 more

Survive for 30 seconds while at 1 health or less.
The Totem is Common vehicle in Crash of Cars.

The lost relic continues to grasp the imagination of daring adventurers unaware of the sacrifices from their predecessors.

Totem can be found in Jungle in all game modes, but is not obtainable in Private Matches.

The player must use the Hovercraft/Speedboat/Helicopter. If playing with Hovercraft or Helicopter, a Boost with 3x Distance Modifiers or Teleport is mandatory. Down the Southern corner of the map is the large wooden bridge and a waterfall is beyond it. After jumping off, turning back is no longer possible and at this point sinking the vehicle will destroy it instantly. There are two “recharging spots" hidden in the bushes to the left of the vehicle. Entering them can be tricky as the bushes conceal the passage, and may require multiple attempts. (Speedboat doesn't need to recharge on any of those bushes). Upon full recovery, turning North will reveal another waterfall concealed by another bush. Ahead is a single rock which may block the vehicle, but it can be easily avoided. A line of three rocks appear beyond, forming a barricade, which can be bypassed by going to the left side of the formation and to the right there is another piece of land.

Downstream, four floating explosive barrels await. Two of them are slowly drifting, while the two others are static. They act identically to all other barrels, and must be avoided to prevent a chain reaction. By this point, Boost/Teleport should be triggered when the ability is about to expire (Boost must be activated a second prior to compensate for its startup delay). Afterwards, the vehicle can go in 2 directions. From the POV of the vehicle, going to the right will lead to a small bonfire island with breakable stonewalls which has a pick-up box which always contain a teleport. This island can be used to recharge the vehicle's ability and/or instantly teleport to the health pickup island south east. On the other hand, if the vehicle goes to the left and then downwards, it will reach a bonfire island with another pick-up box, which will always contains Health (using Speedboat doesn't need to the Boost/Teleport). It should be ideally used only if the vehicle is low on health, although it would respawn later on. It must be carried for the rest of the journey.

The Southwestern direction has six Totem Turrets. Two of the sentries fires single shots and the others launch two-round bursts. Their overall fire rate is quite high, while the damage they inflict is similar to the Cannon's basic value, and can knock back struck vehicles. These weapons are silenced, and will not produce an audio cue when they fire. Several explosive barrels also stand in the way. Precise timing is required for the vehicle to pass just after it fires a shot, which usually results in the vehicle also avoiding the rest of the attacks, assuming if it did not bump into the explosive barrels. The first three turrets are located on the initial path with a barrel placed right after the second sentry and two more placed on the turn, right behind of which is the first burst sentry. The right turn afterwards involves dodging two more burst turrets. Three more explosive barrels await, two placed on the edges of the path and one is slowly drifting amok (here's a tip: if using Speedboat, first you change all your Shield modifiers to duration modifiers, then after finding a Shield, carry it until you reach the recharging spot with Health. Activate your Shield before equipping Health, then you can recklessly run over the Totem Turrets without losing Health, but be careful when the Shield wares off).

Past these obstacles another patch of ground awaits, as well as the terminal challenge. A total of six drifting barrels are placed in the passageway right before the temple. To take advantage of their gaps, It is recommended to drive slowly and back off frequently if the barrels do not allow safe passage.

The initial temple is inconspicuous, although its gates are sealed. The vehicle must be steered onto the carved pattern. Deploying Health and getting at least one pick-up absorbed by the temple will cause its gates to open while a slab-sliding sound plays.

Upon entry, a short animation triggers: Inside the bowels of the temple is a circular pool connected to the unseen interior. The pool itself has illuminated edges. The center wall contains an unknown figure while the rest consists of irregular patterns. Four dragon head sculptures are amongst the structures. A light beam moves from west to east and eventually freezes at the center, accompanied by an arcane sound. The pool's edges project a wall of cyan light as the podium containing Totem surfaces, then it stops, and the lights fade away slightly.

Totem is a four-layered tower propelled by three wheels. The bronze-colored statues each resemble different creatures, namely a falcon, a panther, a monkey, and a crocodile. The falcon additionally is decorated with side protrusions and a crown of feathers. Each head is separated by a stone slab, which also composes the base and the wheel of the statue. The front wheels are attached by a red axle running through the crocodile's mouth, while supported by the base which encases the rear wheel from the sides. Additional plates can be found on each layer of the statue save for the lowest layer.

As a fast, low profile yet agile vehicle, Totem is still relatively stable despite it's height. However it's low health and weight would limit it's usage. Dodging becomes much easier with it's decent handling, and it's high velocity means that a majority of powerful vehicles can be outran.

Due to the general statistics, it's good as a multi-purpose vehicle and is one of the most powerful hidden vehicles. 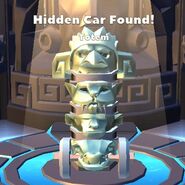