When driving forwards on a straight line, gains additional velocity and ram damage.

Scales over current velocity and depends on the ability to a maximum of 3.

The train from Back to the Future 3
The Train is Fusion vehicle in Crash of Cars.

The archaic monster, back to the future from an unending void.

The Train resembles the stereotypical depiction of a 19-20th Century Steam Locomotive. The front section, colored in dark silver, consists of a plow attached by two bolts, and a circular engine port with a blank plaque in the center, as well as a single spotlight attached to the top and a chimney behind it. The "wheel arches" cover the two front steering wheels. The chimney and the arches have visible orange beams emitting out of them while the front light is more akin to the modern electric light. The middle section has two dome structures and below is the red-painted center as well as two shafts containing the vehicle's drivetrain. The back consists of a metallic silver roof covering the red carriage as well as dark silver wheel arches, which encases the rear wheel partially. An identical blaze also displays itself in the back section of the train. The driving wheels in the back are attached with metal axels to the front wheels which moves them all at the same velocity.

The Train will gain an increase in top speed if left traveling straight for a second as smoke begins to pour out of the chimney, from white steam to black smoke, then finally to a red flame. Its ramming attacks also do up to 3 damage upon hitting an enemy, though the knock-back is unchanged, if the target survives. The boost wears off if the Train loses too much velocity, or makes a turn exceeding 45 degrees. There's no cool down in ability activation and technically it can be re-activated as soon as the boost wears off.

The ability is triggered only by the train's own movement. That being said, if it was rammed from behind or otherwise received a knock-back effect, this ability will not trigger. It also does not seem to stack with the map-based speed boosts in Frozen Vale, Facility, Hypergrid, and Lounge, and does not apply to any other direction.

The Train is a powerful vehicle that does suffer from reaction issues as it had a large hit-box and the ability doesn't activate quickly, and the acceleration is quite undesirable by default. However, once it kicks in, the Train would fiercely ram anything that gets in the way, which makes it even more dangerous than a Rumbler (That deals usually 2 damage per ram attack without any damage-boosting modifier), not to mention its reusable ability being independent of power-ups and its top speed rising higher than even a Speed. Its damage is substantial against most vehicles that are usually unaware of the Train at such velocity.

Its main drawbacks would be its rather slow acceleration from a stand still, its large hitbox, and its sluggish handling. Without the use of its ability, the Train remains a very slow vehicle with relatively poor chances of survival. The use of the boost in this case is more than recommended to ensure it doesn't get caught into undesirable encounters, and to outrun cars trying to hunt it down.

Ideally, a map that suits the train would be one with significant room along a single linear axis, so that the train has plenty of opportunities to activate its ability. Such potential maps are Moon, Narrow, Golf Course, Skygarden, etc... 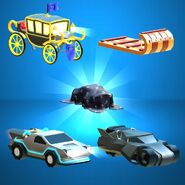 The original fusion combo for Train.

Sierra No.3, the train used in the filming of Back to the Future 3 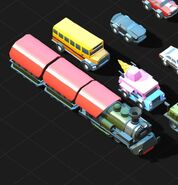