The Tuk Tuk is Common vehicle in Crash of Cars.

Isn't really the noisiest one around but still does well at pestering.

Tuk Tuk is much slower than most 4-health vehicles. It instead relies on its small hit box and great handling for evasive maneuvers. 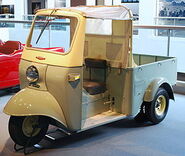 The 1957 variant of the Daihatsu Midget on display