Reverse continuously for 20 seconds.
The UFO is Common vehicle in Crash of Cars.

It learned the common sense of most other vehicles - from the hard way.

It is very complex and requires some tight moves. You also need a sufficient prestige level. After each step is completed, the progress is saved and will not need to be completed again

First, you need a sufficient prestige level. You need at least 2 boost modifiers that increase distance. Equip them and get in Lounge Map. A Plane or the Vertigo is recommended on lower levels where Boost modifiers are absent. You can also choose the Monster/Hovercraft/Helicopter to make the process much easier.

Alternatively, you can choose to start a Private Match (select Team Deathmatch) and invite a friend with a War Machine, but ensure that you must join your friend's team right after you click the start button, thus disabling damage between the vehicles. However, any of the aforementioned vehicles except the War Machine are required, so as the Boost.

An alien will be seen roasting food over a bonfire, and was alerted to the presence of the UFO being pushed near the cave. He walks out and attempts to search inside the UFO. After a quick search, he leaves the UFO and a beam is shot above him (presumably from another airborne UFO) and was taken away by it, the screen then centers on the UFO's front-quarter view and stops at this point.

The vehicle resembles a typical UFO ship, having a saucer-like appearance. It has a single headlight. Inside the cockpit has a blue seat, which is visible only in the cutscene or when it was broken. Its wheels are from a broken toy seen in Lounge, which is given by the player. It emits a green trail whenever it moves in the battlefield.

The overall stats of UFO are truly weak and should only be used for casual playthrough. While its slippery handling can be used by some players for maneuverability, most will dismiss it as horrible and only be kept in the garage in favor of other vehicles. 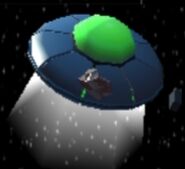 The UFO's cameo in the Moon main menu

UFO when it was found