The Ultra Phantom is Boss vehicle in Crash of Cars.

Mortal enemies shall make amends as they fight the very demon they freed.

Most of the Ultra Phantom's spawn requirements are similar to Mega Phantom. Usually it spawns in place of the Mega Phantom with a 50% or 1/2 chance, but only if players inside the arena have an average of 15 crowns or more (this is not always the case, however).

Note that Freeze Cannon, Oil, Railgun, Drill and Sentry Turret (for Citadel users) will always be unusable as all power-ups are removed prior to the fight and they don't spawn in the boss room. Other power-ups not listed in the following parts of the article are not recommended for use and should be used immediately in favor for obtaining potentially better ones. 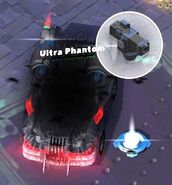 Ultra Phantom preparing to use its boost.

Ultra Phantom with its Pirate Cannon. 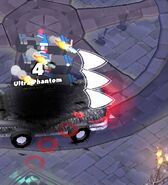