Crash of Cars Wiki
Register
Don't have an account?
Sign In
Advertisement
in: Dungeon Update, Epic Cars, Cars,
and 3 more

Replaces the Homing Missile with the Mini Turret

In total, destroy 20 vehicles with the Mini Turret

300 Gems
The Vulcan is an Epic vehicle in Crash of Cars.

There are always things that ironically would be better dealt with a storm of lead.

The Vulcan has access to Mini Turret which replaces the Homing Missile.

It will always obtain the Mini Turret as the 1st power-up after spawn.

When obtained, the miniguns at the sides of the Vulcan will rise. When activated, they will target the closest enemy with 1.3 damage per second (DPS).

The turrets have a duration of 9 seconds which starts the moment the power-up was deployed, indicated by the white bar below. It can also be manually dismounted, disarming it instantly. When the duration expires, the miniguns will retract into the vehicle.

The machine guns have limited range, and will not target invincible vehicles.

The Mini Turret does not have modifiers.

The Vulcan's performance is rather sub-standard. Its low top speed, large size, low health and average handling are all getting in it's way, so offensively, it performs poorly, and is thus not recommended for pursuits. Thus, it's more of a passive vehicle roaming around the map while staying out of brawls.

However, the Homing Missiles' replacement opens up more defensive options. While the Homing Missile is a projectile and actively chases the enemy within it's great range and duration, the Mini-Turrets are always accurate, capable of hitting their targets as long as they are within range. Their DPS, while not very high, are actually quite formidable over the short duration. In a pinch this can usually deter pursuing enemies as they will take a lot of damage should they get any closer. It works well against slower enemies or those who approach without ranged weapons, but otherwise, the turrets may fail to take out the enemy entirely. Their short range also hampers their efficiency agains faster vehicles.

Regardless, the Vulcan's a vehicle that requires a lot of strategic concerns due to it's unappealing base stats. Mini-Turrets are hard to come by, so they must be used wisely for their lifetime is extremely short. It's lack of compatibility with power-up modifiers, however, is the final straw - The homing missile has a single modifier and does not seem to have any effect on the mini-turret (the same can be said for missile truck, who compensates in quantity instead), whereas on other power-up relevant vehicles these could have served as good augments. Gameplay is quite challenging with Vulcan as a consequence, requiring extreme precision for maximum impact. 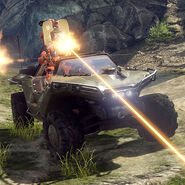 A Warthog in action in it's respective game