Crash of Cars Wiki
Register
Don't have an account?
Sign In
Advertisement
in: Stub, Hidden Vehicles, 6-Health Vehicles,
and 3 more

Make 8 Collisions against other vehicles in a single game

The YG356R8 is Common vehicle in Crash of Cars.

More of a relief, less of a beast. Typical day.

The YG356R8 resembles a six-wheeled APC.

This car being a 6-health has average stats. Passive gameplay is suggested along with use of defensive weapons as escaping is not a choice for its speed nor its size. However it's good handling can be used to pull off some tight maneuvers.

This hidden vehicle requires the Facility Map. While you may use any vehicle, it is recommended to use wider/bigger vehicles, because there will be objects in the map that will need to be pushed during the first three steps. This can be done in any mode, including private matches.

NOTE: All the steps must be done in order to get the YG356R8 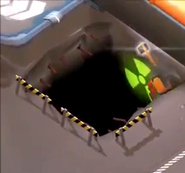 First location as stated in Step 1

Second Location as stated in Step 2

Third Location as stated in Step 3

Sequence and Location of the barrels as stated in Step 4